We Are Only His Tools ~ Swami Chidanand Saraswatiji

We Are Only His Tools ~ Swami Chidanand Saraswatiji 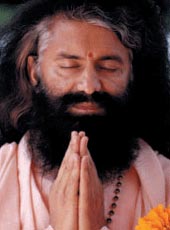 
A few years ago, the United Nations was having its 50th Anniversary Golden jubilee celebration. World leaders  religious, political, social  were gathered together to commemorate this special anniversary. Numerous renowned people gave speeches  on the global significance of the UN, on the importance of fostering inter-ethnic harmony, on how to curtail the insidious trafficking of drugs, on the necessity of preserving and protecting our rapidly diminishing natural resources.

Each was allotted a short period of time in which to speak. Most were given 3 minutes; some were given 5 minutes. The most important delegates were allotted 7 minutes. Time was watched carefully. Note cards were held up, alerting the speaker that he or she had 3 minutes left, then 2 minutes, then 1 minute.

The name Dads J.P.Vaswani was called, and an old Indian saint, clad only in scant saffron robes, walked slowly, yet purposefully and unwavering to the podium. As he spoke, silence descended upon the room. While most speeches were read from note-cards, or were the product of careful and deliberate editing, his words seemed to speak themselves. Dadaji was given 5 minutes to speak. However, as the organizers held up signs that read, 2 minutes left, then 1 minute left, he showed no signs of winding up his talk. The signs then read, 30 seconds left, then Finished!!! However, the saint was in such ecstasy, he was so impassioned with the words that were effortlessly flowing from his mouth, that he seemed not to even notice the signs.

At first the organizers were noticeably restless and anxious. After all, there were so many other people to speak so many other segments of this important function. How to get his saint to step down from the podium? However, as he continued, his words were like a lullaby. Even the anxious organizers became still and peaceful, mesmerized by the quality of his words and his tone. The hall  filled with an audience of thousands  was as quiet as if it were empty. Dadaji spoke for 25 minutes, an unprecedented amount of time.

When he concluded, the silence of the auditorium broke like thunder into a clamorous standing ovation. No one who was present was unchanged. The saints words had reached not only minds, not only hearts, but souls. He was flooded with accolades and tar streaked faces as he descended from the stage. Oh Dadaji, your speech was incredible. So inspiring; So uplifting. It was just wonderful. Everyone wanted to praise this grey-haired yet seemingly ageless Indian saint. After one man took Dadajis hands and gave particular effusive praise, the saint looked sweetly into his eyes and replied, Yes. It was wonderful. I was also listening.

~~~~~~~~~
I was also listening. I was also listening. This should be our mantra. For , it is not we who speak. It is He who speaks, although we like to take the credit. How easy it would have been for Dadaji to have simply replied, Oh, yes, I know my speech was good. I spent days preparing it. Or Yes. Im a very good speaker, arent I? However. He is a true man of God. He knows from where his words come. He knows whose words flow through his mouth. Those who are the true inspirations, who are the true teachers of this world, are actually simply channels. They are not the ones who spend lifetimes refining their tenaciously held beliefs and then impose these upon others. Rather, they simply open up the channels inside them and let God flow into their hearts and through their mouths or their pens. We are all here as tools for His work, as expressions of His love. Let us realize that; let us break the dams within us, so the river of His work and His message can flow ceaselessly through us.
Please click here to (Post a comment)
We Are Only His Tools ~ Swami Chidanand Saraswatiji
Do not use link below!
_________________
My Eternal Love, Sarveswara