Kuan Yin ~ Prayer for the Abuser

Kuan Yin ~ Prayer for the Abuser 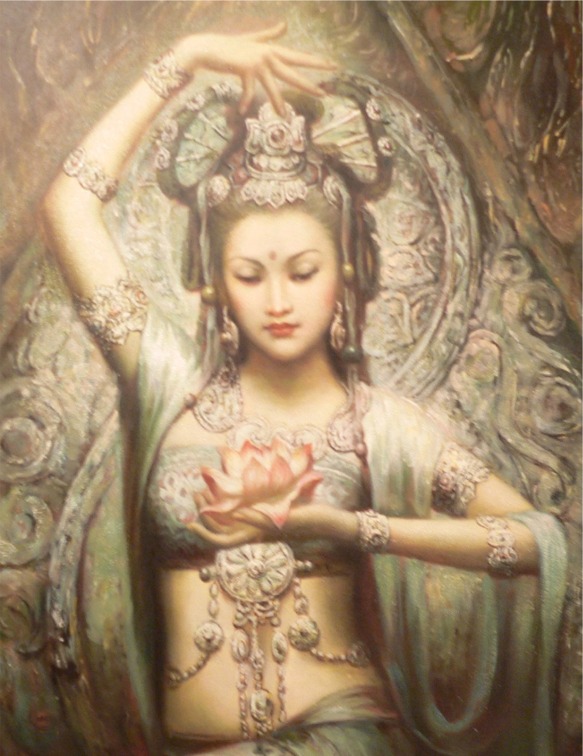 Today Kuan Yin is worshipped by Taoists as well as Mahayana Buddhists--especially in Taiwan, Japan, Korea and once again in her homeland of China, where the practice of Buddhism had been suppressed by the Communists during the Cultural Revolution (1966-69). She is the protectress of women, sailors, merchants, craftsmen, and those under criminal prosecution, and is invoked particularly by those desiring progeny. Beloved as a mother figure and divine mediatrix who is very close to the daily affairs of her devotees, Kwan Yin's role as Buddhist Madonna has been compared to that of Mary the mother of Jesus in the West.

The Goddess Kwan has great healing powers. Many believe that even the simple recitation of her name will bring her instantly to the scene. One of the most famous texts associated with the bodhisattva, the ancient Lotus Sutra whose twenty-fifth chapter, dedicated to Kwan Yin, is known as the "Kwan Yin sutra," describes thirteen cases of impending disaster--from shipwreck to fire, imprisonment, robbers, demons, fatal poisons and karmic woes--in which the devotee will be rescued if his thoughts dwell on the power of Kwan Yin. The text is recited many times daily by those who wish to receive the benefits it promises.

Devotees also invoke the bodhisattva's power and merciful intercession with the mantra OM MANI PADME HUM-- "Hail to the jewel in the lotus!" or, as it has also been interpreted, "Hail to Avalokitesvara, who is the jewel in the heart of the lotus of the devotee's heart!"

Living a Life Governed by Integrity

"The best you can do," stresses Kuan Yin, "is to live a life governed by integrity. Live your life with authenticity. Do the

best you can and be honest with yourself and others. There is a collective agreement that this (life you are living on earth)

is reality. Therefore, you have to play along...Do not believe that your humanity prevents you from being spiritual. Know

that this (earth) drama doesn't mean spirituality doesn't exist on the earth plane. Try to be forgiving and objective when

enduring your own earthly drama. Indeed, one's approach to one's own life drama can actually affect the outcome. That

is, certain interactive strategies can render an "ordinary" drama, spiritual. Don't fall into the trap of ego and money. Don't

be too concerned whether the drama you're experiencing is a result of karma. Rather, emphasize the concept that we

are all one, that no one is better than the other. You are all sacred energies and everyone is as sacred as the next."


The reasons for suffering are as personal and varied as one's voice or thoughts. Humankind needs to understand that suffering is just (and indeed, people accept it) because of higher reasons. No one is a victim, explains Kuan Yin.

To those who withhold refuge,

I cradle you in safety at the core of my Being.


To those that cause a child to cry out,

I grant you the freedom to express your own choked agony.


To those that inflict terror,

I remind you that you shine with the purity of a thousand suns.


To those who would confine, suppress, or deny,

I offer the limitless expanse of the sky.


To those who need to cut, slash, or burn,

I remind you of the invincibility of Spring.


To those who cling and grasp,

I promise more abundance than you could ever hold onto.


To those who vent their rage on small children,

I return to you your deepest innocence.


To those who must frighten into submission,

I hold you in the bosom of your original mother.


To those who cause agony to others,

I give the gift of free flowing tears.


To those that deny another's right to be,


To those who see only division and separateness,

I remind you that a part is born only by bisecting a whole.


For those who have forgotten the tender mercy of a mother's embrace,

I send a gentle breeze to caress your brow.


To those who still feel somehow incomplete, I offer the perfect sanctity of this very moment.